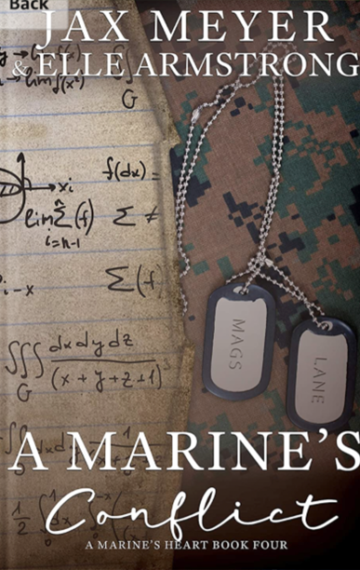 Mags Newsome has already given over a decade of her life to the Marine Corps. She’s learned to compartmentalize her life to survive the “Don’t Ask, Don’t Tell” policy that keeps servicemembers from serving openly. But that’s also kept her from any meaningful relationships.

Elaine ‘Lane’ Chapman moved to the US from England with her girlfriend who soon left her. Remaining in sunny southern California, Elaine built a life for herself as a college math professor, content to experience love through romance novels rather than risk her heart again.

A chance encounter in a bookstore cafe brings the two women together where they discover an off the charts attraction. As they battle their feelings to maintain their ‘friends with benefits’ agreement, another war looms in the Middle East, threatening everything they’ve built.

A Marine’s Conflict is a standalone lesbian romance in the Marine’s Heart series, with overlapping events from A Marine Discovery.